The miraculous swirling sun witnessed by pilgrims to Fatima in 1917 was a representation of the swastika and a sign that heaven had sent Adolf Hitler to punish humanity for its sins.

The miracle at Fatima also showed that the God of Christianity and Ra, the sun god of ancient Egypt, are the same deity. After centuries of "Passover" — passing over from the Egyptians to the Jews to the Christians to the Muslims — God was again appearing on earth as a sun god, this time in the person of Hitler.

The events associated with Our Lady of Fatima began on May 13, 1917, when three children tending sheep near the town of Fatima in central Portugal reportedly saw the Virgin Mary appear as a shining figure in an oak tree. She told the three children, Lucia dos Santos, age 10, and her younger cousins Francisco and Jacinta Marta, to return to the site on the 13th day of the month for the next five months. During these visits, she imparted to the children a vision of hell, warned them of a second world war and asked for the conversion of Russia from its move toward communism.

On the final visitation, some 50,000 people had arrived for the October 13 event, expecting a miracle promised by the Holy Mother. The crowd endured a heavy rain fall. In the afternoon, the sky cleared, and the sun reappeared, but as a dull silver disk with a sharply defined edge, like a plate in the sky. One could look at it directly without hurting the eyes.

Fire wheel  Suddenly, the sun began to tremble and shake, then began spinning furiously while throwing out light in all colors. One witness noted, "Everything assumed those same colors: our faces, our clothes, the earth itself." Awe was followed by shock: The spinning sun was falling and turning blood red as it plunged toward earth. The sun was variously described "like a bicycle wheel" or a "fire wheel." Then the sun returned to its normal place in the sky and resumed its customary appearance. These events were observed not just by the faithful but by skeptical reporters, including Avelino deAlmedia, the chief editor of O Seculo, an anticlerical daily newspaper in Lisbon.

The spinning sun was the swastika. According to the Holocaust Research Center at holocaust.trc.org., the swastika "is considered to be a representation of the sun and is associated with the worship of Aryan sun gods." Holocausthistory.net, a website of The Holocaust Centre, Beth Shalom, stated that the swastika was "sometimes used to symbolize the sun's movement."

The neo-Nazi website, Stormfront, prefers to interpret the swastika as the Hammer of Thor but acknowledges, "Savitri Devi, the well-known National Socialist writer and philosopher, interprets the Swastika as a symbol for the sun, and there is evidently some use of it as such by at least one National Socialist artist. However, we know of no historical reference to it as a Germanic sun symbol, although some sources do believe that it could be derived from the well-known Germanic Sunwheel."

The Fatima sun wheel is better understood in the context of the Virgin Mary's second message, in which she told the children, in part, "The war [World War I] is going to end; but if people do not cease offending God, a worse one will break out . . . When you see a night illuminated by an unknown light, know that this is the great sign given you by God that he is about to punish the world for its crimes, by means of war, famine, and persecutions of the Church and the Holy Father. To prevent this, I shall come to ask you for the consecration of Russia to my Immaculate Heart, and the Communion of reparation on the First Saturdays. If my requests are heeded, Russia will be converted, and there will be peace; if not, she will spread her errors throughout the world, causing wars and persecutions of the Church . . ."

According to this message, the chief cause of World War II is perceived to be offenses against God and communism in Russia. There is no reference to Nazism or the coming suffering of the Jews. One could assume from this message that Hitler was not the cause but the effect of evil. Hitler was an incarnation of the sun god sent to punish humanity for its corruption and decadence. On the other hand, if you wish to eliminate the judgmental Catholic spin from the spinning sun, you could still conclude that Hitler’s falling sun was sent to burn away the old order and make way for a new one.

Karma  If you prefer Eastern spirituality, you might argue that Hitler was karma for colonialism. Europe conquered and oppressed much of the world; Hitler conquered and oppressed much of Europe, giving the colonial powers a taste of their own medicine. “Nazism was the application of colonialism to Europe,” noted Aimė Cėsaire, the Afro-Caribbean author and politician.

As the German spinning sun fell toward earth during World War II, it turned red with the blood of its victims. One could also extend this swirling sun metaphor to including the "falling sun" of militaristic Japan, as represented by the "rising sun" flag.

The Virgin Mary's reference to a "night illuminated by an unknown light" came true on January 25, 1938 as reported the next day by The New York Times: "The Aurora Borealis, rarely seen in Southern or Western Europe, spread fear in parts of Portugal and lower Austria tonight while thousands of Britons were brought running into the streets in wonderment. The ruddy glow led many to think half the city was ablaze . . . The lights were clearly seen in Italy, Spain, and even Gibraltar. The glow bathing snow-clad mountain tops in Austria and Switzerland was a beautiful sight but firemen turned out to chase non-existent fires. Portuguese villagers rushed in fright from their homes fearing the end of the world."

Since northern lights are caused by high energy particles emanating from the sun, this unusual activity, like the Fatima swirling sun, could be attributed to a solar deity. Indeed, the falling sun observed at Fatima is consistent with the theology of Ra, the Egyptian sun god expressed as a trinity: Khepri in the morning, Ra at noon and Atum in the evening. Khepri, symbolized by the scarab, represented creativity and resurrection; while Atum, associated with the ram and water lily, carried the "dead" sun through the night so it could be born again in the morning.

The central god, Ra at noon, depicted with the head of a falcon, corresponds to the falling sun of Fatima. As he descends, Ra grows old and weak, and his earthly subjects become wicked and disobedient. Ra summoned a daughter, Sekhmet, who slaughtered those who rebelled against him until Ra, through trickery, transformed her into Hathor, the goddess of desire and fertility. This bloody retribution by the declining sun god corresponds to the vengeance meted out by Hitler during World War II.

Deadly daughter  Who was Hitler's mythic daughter? Western religion does not allow for a dark goddess, so Sekhmet emerged in cinema in that early war year, 1939, in the movies The Wizard of Oz and Gone With The Wind.

Behold the young warrior Dorothy, demanding strength from her weak inner men. From the man of straw, she drew a bundle of sticks, the fasces of fascism. From the tin man, she forged steel for bullets and armor for tanks. From the cowardly lion, she demanded the courage of the lioness Sekhmet. She killed rival witches in murders disguised as accidents. Slippers dipped in ruby blood; soon the red torrent would rinse her hair.

Now she becomes Scarlett, Witch of the South, a widow dancing on the corpse of her husband. Men run off to war on the false promise of her tease. She yearns to be tamed by the pure and honorable Ashley but is doomed to coupling with the equally black-hearted Rhett. She can only give birth to death and a life cut short. Cursed is her womb.

From the mismatched mating of gods came war and profiteering. Ashley's hot sword, never cooled in the darkness of Scarlett, must be quenched in the blood of Yankees. The scheming Rhett, who could have been redeemed by the good heart of Melanie, is free to be the scoundrel and blockade runner, feeding the machine of war.
​
Sepia tones give way to vibrant color. Dreams invade the waking mind. Celluloid battles draw real blood. Dorothy Gale came in a tornado and is gone with the wind. But she will never give up. Tomorrow is another war. 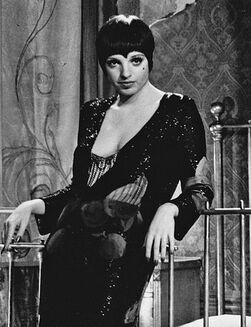 Liza Minnelli as Sally Bowles
​The sexual exploits come to an end as the playboy abandons both and Bowles aborts her baby with Roberts to pursue her singing career and carefree lifestyle.

The conventional liberal interpretation of Cabaret is that Bowles and her coterie of performers and lovers are creative free spirits who are bravely standing up against the brutish fascists. However, another interpretation is that the Kit Kat Club and its denizens represented all the filth, corruption and anarchy that plagued the Weimar Republic. The Germans gave power to Hitler to “restore morality.”

The true lesson of Cabaret, that decadence provokes fascism, has been lost on Hollywood because the cultural revolution that began in the mid-1960s seems unending. Every year sees another performer, like Chelsea Handler or Sarah Silverman, who pushes the envelope to bring new levels of depravity to the media.
​
But the reaction is taking place, if not here, then on the other side of the globe, where Islamo-fascism provides a polar opposite to Hollywood. The polar analogy can be taken to another level. The earth's magnetic field is long overdue for a polar shift, in which the magnetic fields are reversed and the needle on your compass will point south. Perhaps we will experience a similar reversal in the “moral compass.” When liberal democracy comes to the Middle East, theocracy will triumph in the United States.
You may also enjoy:
The Black Stone
​Images  Crowd looking at “miracle of the sun,” Judah Ruah, for O Seculo, public domain; Liza Minnelli as Sally Bowles In Cabaret, Allied Artists Pictures Corporation, public domain