Gargoyles in the Bedroom

I had been aggravated for several months by noise from a neighbor. On October 14, 2020, a boisterous backyard gathering dispersed shortly after 10 p.m. but my anxiety kept me awake until about 4 a.m.

At approximately 5:15 I was awakened by a light. To my left, what had been a shuttered window was now a blank wall softly lit with a slight yellowish tinge, as if illuminated by candlelight. Then, near the top of the wall, appeared the living head of a monster, like a cathedral gargoyle. The beastly head was replaced by another after a couple of seconds, then followed by another. This happened five or six times. One head had glowing eyes. Another appeared to be a cross between a man and a lion. Then the heads disappeared. 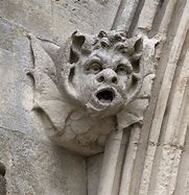 I turned to my right to turn on a light and make notes. When I looked back, the shuttered windows had returned.

While this vision might be related to my anxiety, this seems to be a spectacular display for something as mundane as a noisy neighbor. Perhaps the event released demons from my subconscious. Did I purge beasts from my mind only to release them into the world?

I looked up gargoyles on Wikipedia. One section noted “gargoyles are said to protect what they guard, such as a church, from any evil or harmful spirits” but another passage said “The primary use of the gargoyle was to illustrate evil through the form of the gargoyle.”

Two days later, after an even noisier evening, I felt shaky and went to the ER, where I described the “hallucination” and asked for and got a prescription for sleeping pills. A blood panel came up ok. The discharge nurse asked questions like “Do you know where you are?” and “What month and year is this?” but also commented that I might be a shaman. Three days after the vision the noisy backyard gatherings stopped.

This was not the first time I had been awakened by an illuminated vision, but that is another story.

Discover more demons in The Satanic Universe: Journal of the Antichrist. Click here.