Scientists who debunk miracles have ignored a miracle among their own kind: the long life of British scientist Stephen Hawking, renowned for his theories on black holes and his book A Brief History of Time.

Diagnosed with Lou Gehrig’s disease (ALS) in 1963 when he was 21, Hawking lived to age 76 with the crippling neurological affliction, which typically ends its victim’s life within 39 months. Hawking’s longevity was described as “extraordinary” by Anmar Al-Chalabi, director of the Motor Neuron Disease Care and Research Centre at King’s College London.

Since miracles are associated with the curing of a disease, what could be miraculous about having a disease? The answer may be found in how divine design intersects with British and Egyptian culture.
​
Hawking received his diagnosis in 1963, the same year as the debut of the BBC TV series Doctor Who, which features an eccentric human-like alien who travels through time and space to thwart various evildoers, including Davros, creator of the robotic Daleks. Like Hawking, Davros is confined to a sophisticated wheelchair and speaks with an electronic voice. 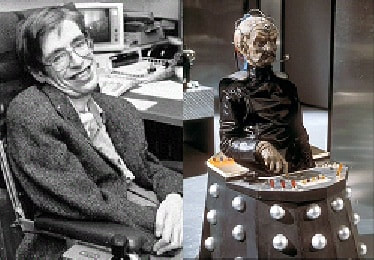 If Hawking had not been humbled by a crippling disease, perhaps he would have used some of his great knowledge for destructive purposes. God may have split Hawking, creating two “half-men”: a crippled good Hawking who lives in the material world and a disabled bad Hawking (Davros) whose chicanery is confined to fiction.

The word “hawking” is a synonym for “falconry.” The falcon represents the central figure in the trinity of the Egyptian sun-god Re: Khepera (scarab) at dawn, Re (falcon) at noon, and Tem (water lily) in the evening.  In 1963, the Beatles represented the scarab god, bringing the power of resurrection and self-renewal after the world had “slept” and recovered from World War II.

The falcon power of Hawking, representing knowledge and authority, was “out of place” in 1963 and had to be restrained, even crippled, so that Khepera (the Beatles/scarabs) could create a cultural revolution without being challenged by other aspects of the trinity.

Hawking’s survival bears witness to how God works his will, however cruel and capricious, through both modern culture and ancient religion.