Year of the Fire monkey

Chinese astrology promised success for Donald Trump in 2016. The Chinese New Year of the Fire Monkey started on February 8. According to Chinese astrology, the spirit of the year is inspired by the Monkey. The Monkey is hyperactive and strong-minded. Freed from inhibitions and guilt, the Monkey will think the unthinkable. Expect him to say and do outrageous things.

The Monkey looks at new ways to solve problems but he can be tricky, opportunistic and not trustworthy. The establishment fears the Monkey as he threatens to overthrow the old ways of doing things.

Trump was born on June 14, 1946, in the Year of the Fire Dog. According to famousbirthdays.com, “In all aspects of life, the Fire Dog displays confidence and an unbending will. These qualities, when paired with charisma and charm, make the Fire Dog one of the most effective leaders of its sign.” The Dog is complementary to the Monkey.

The media pointed out a third facet of the Trump personality. Glenn Beck called him an “infantile act.” Trump is just a “big sulking baby,’ said Ben Stein. If you combine Trump’s infantile qualities with the dog and monkey, you get a mythical creature that debuted in a 2016 Super Bowl commercial: 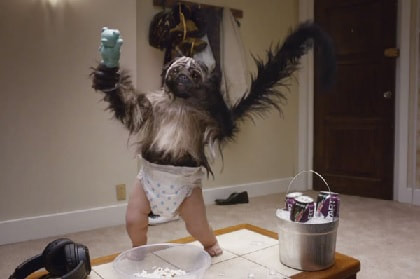