In September 2008, I was channel surfing when I ran across an airing of the movie Batman, starring Jack Nicholson as the Joker. I had seen the movie when it originally appeared in theaters in 1989. Vicky Vale, portrayed by Kim Bassinger, is being seated in the cafe section of a museum. I decided to keep watching as I anticipated my favorite scene, in which thugs vandalizing works of art are interrupted by the Joker when they reach The Scream by Edvard Munch. He spares the painting because he kind of likes it.

On TV, the vandals smear bright paint on various masterpieces. The Joker approaches the terrified Vale. As the vandalism continues, the Joker calls out to his henchmen across the room to leave alone a dark painting. I cannot quite make out the details of the picture, but it is not The Scream. 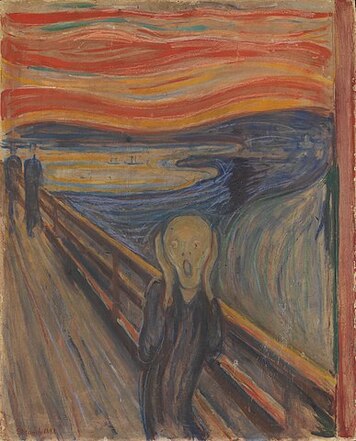 A day or two later, I see another showing of Batman listed in my newspaper television schedule. I decide to watch it from the beginning. Maybe there was another vandalism scene I had missed. Here we go again. Vale puts on the gas mask from the gift box. Diners swoon as gas enters the museum. The Joker and his thugs vandalize works of art until they reach one painting, in which a man sitting in a dark room is flanked by two sides of beef hanging from the ceiling. The Joker spares the painting, saying, "I kinda like this one, Bob. Leave it."

Through research on the Internet, I discover this painting is Francis Bacon's Figure with Meat. The seated figure is a caricature of Pope Innocent X. 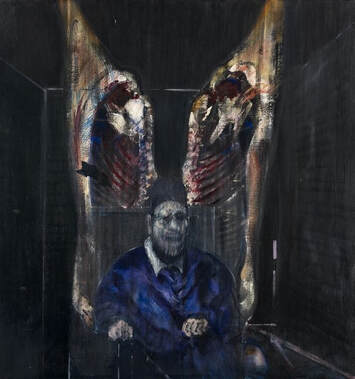 But this is wrong again. In that first showing on TV, the Joker was standing or sitting across from Vale when he spares the picture; in the next showing, he is standing next to the picture and I can see it more clearly. I have discovered a third version of Batman.

Somewhere between the debut of Batman in 1989 and 2008, the universe was split in two: one containing Batman with The Scream; the other containing the movie featuring Figure with Meat. What is the significance of the different painting? I would suggest that Figure with Meat, featuring a pope, represents the sex scandal in which Roman Catholic priests treated boys “like meat.” In our version of history, the scandal was big enough to result in the selection of Pope Francis, who is taking the church and even world history in a different direction.

These experiences might fall into the category of a Level 3 parallel universe, in which each possible observation corresponds to a different universe, although Level 3 theory does not account for my memory of the “previous” universe. What happened in the universe that kept The Scream in Batman? I don’t know but apparently it represented a path of history in which much of humanity screams in anguish or terror.

I am not the only one who remembers The Scream being in the movie. On the website The Easter Egg Archive, Cruel Messenger wrote: I would have to back the person here who said the painting is "The Scream" by Edward Munch. Why? Because it says so in the film's novelization, that's why. Now granted, the novelization of any film may not reflect the final cut of the film. But in this case, it seems to back up The Scream theory. Robinzo wrote: I agree, I seem to remember it being The Scream by Edvard Munch (my favourite painting).