My mother, the whistleblower

In 1957, after her divorce, my mother Lillian began working for Gilfillan Brothers in Los Angeles as an electrical and mechanical assembler in their Radar Production Department. From there, she went a couple of years later to North American Aviation in Downey, California, where she worked as an electronic assembler on parts for military jets.

At North American she claimed that faulty components were being approved despite her objections. Looking back, these might have been shortcuts taken to increase profits but at the time my mother believed this was part of a communist plot to sabotage U.S. jets and she reported it to the FBI, which interviewed her. Apparently, nothing came of the investigation and she was fired and blacklisted from the industry.
​
Meanwhile, she had decided to take her complaints to a higher authority. She had heard that President Kennedy was visiting actor Peter Lawford at his Santa Monica beach home. With me in tow (I was 10 years old), we went to a Catholic Church in Santa Monica. As I waited in the car, she went inside where she apparently persuaded a priest to give her Lawford’s address. We drove to a house on the beach. Again, as I waited in the car, she went up to the door and rang the bell. No one answered. We drove back home. 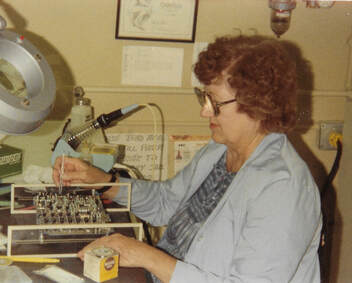 Lillian Urbanek at Odetics
​​We took a six-month hiatus to visit relatives in Texas. My mother changed our last name and after obtaining electronic assembly training at a community college, my mother obtained a job at Lockheed in 1964. From there she went to Odetics in Anaheim, where she worked on robotics and recording devices for the space shuttle program. She obtained several commendations and awards at both Lockheed and Odetics. She retired in 1988.
Difference between men and women is 3.14159 . . .

Pi (π) is both the sixteenth letter of the Greek alphabet and the ratio of the circumference of a circle to its diameter. The difference between what is round and what is straight has no exact value. The calculation of pi begins at 3.14159 and stretches indefinitely.

The first known attempted calculation of pi was recorded in 1650 BC by an Egyptian scribe who estimated the ratio at 3.16. Today, with the help of computers, pi has been calculated to over 1.24 trillion places. Pi even has its cult followers: Hundreds of math mavens have joined clubs to investigate and celebrate the ratio.

Pi may provide a link between mathematics and sexuality. Since the straight line (diameter) is symbolic of the male and the circle (circumference) represents the female, one might conclude that pi signifies the unsolvable and infinite differences between men and women. The sexes will never be able to "figure" each other out. Pi is an irrational number because it cannot be expressed as a fraction with integers in both the numerator and denominator. Similarly, men and women will do irrational things to maintain a relationship.

However, one can also see a positive aspect in the ratio: As the circumference increases, so does the diameter, and vice versa. Thus, whatever expands the horizons of the woman also expands the opportunities for the man.

Consider a wheel in motion, such as the wheels on a bicycle. On rising ground, the cyclist must pedal, in which case the straight-line (male), piston-like motion of the legs turns the wheels. But when coasting or going downhill, the rims (female) of the wheels carries the bicycle forward.

The metaphor might apply to the journey of life. As one ascends to adulthood, one should apply the male aspects of ambition, a warrior's discipline and linear (straight-line) thinking. At maturity and the plateau of life, one should balance the male and female components of life. As one ages and goes "downhill," a person should rely more on such female qualities such as compassion and sociability.

But Jane, darling, dammit, we’re every bit as Euclidean as yin and yang: πr² is our area and 2πr is our circumference. — Kurt Vonnegut, from messages sent to his girlfriend Jane, whom he married in 1945.

The ancient Egyptians also found sex in numbers and geometry, as noted by Plutarch in Moralia Vol. 5. In a triangle that can be measured as three by four by five units, the erect side (3) was likened to the male, the base line (4) to the female and the hypotenuse (5) to the child of both.

Obsession  While a math problem seems an unlikely subject for a film, Pi the movie became the sensation of the 1998 Sundance Film Festival. In the movie, Max Cohen, a New York mathematician, discovers there may be a pattern in the seeming chaos of pi, a pattern that could predict activity in the stock market. His pursuit of pi leads him into conflict with a Wall Street firm and the leader of a Hasidic sect who believes his research must be used to unlock secrets in the Torah. Cohen's obsession with pi sends him down a path filled with hallucinations and paranoia.

Like the mathematician in Pi, I too have become obsessed with searching for the Truth. According to the movie, Max Cohen's problems began at age six, when he was staring at the sun and was temporarily blinded. Ever since, he's had terrible headaches. I remember as a child climbing on a jungle gym on one cold winter day. For some reason, I looked up at the sun. As I held one hand up to shield my eyes, the other hand slipped, and I fell to the ground and temporarily lost consciousness. Luckily, I wasn't seriously injured. It is a story as old as Icarus, whose wings melted as he flew toward the sun. But what if you have not the artificial wings of Icarus but the true wings of a falcon?
​
There is now a breakthrough for all of us seeking the Light and Truth. Affordable solar telescopes employing hydrogen-alpha and blocking filters allow everyone to safely view the sun without “melting” the eyes. You can see the Light without going blind; through this website, you can pursue the Truth without going mad.
You may also enjoy
amazonzombie.com
Images  Dried roses, Alex Proimos from Sydney, Australia, CC BY 2.0; Lillian Urbanek at Odetics, personal collection of author