Lincoln-Kennedy links are proof of god

It is easier to prove the existence of God if you think of him less as a creator and more as a criminal. Circumstantial evidence puts God at the scenes of our most infamous crimes. The synchronicity linking the assassinations of Abraham Lincoln and John F. Kennedy is circumstantial evidence of a God who arranges murders. Only God could program or write history so all these connections would fall into place. Many of the links are well-known:

Both Lincoln and Kennedy were shot in the head from behind while sitting next to their wives. Lincoln was shot in Ford's Theater. Kennedy was shot in a Lincoln Continental made by Ford. Both presidents were accompanied by another couple and the male companion of the other couple was wounded by the assassin. 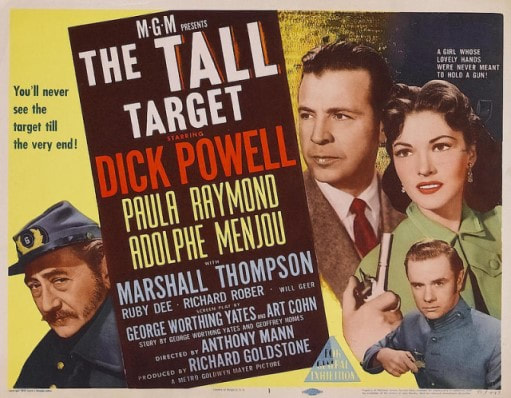 In the 1951 movie The Tall Target, inspired by real events, Dick Powell plays a New York police detective, Sgt. John Kennedy, who boards a train to thwart a plot to kill Abraham Lincoln as he makes a pre-inaugural speech in Baltimore in February 1861.

Conspirators on the train know of Kennedy's mission and plan to get him out of the way. One character tells Kennedy, "I don't know anything about a plot against Lincoln's life, but there certainly seems to be one against you." A young man on the train, who has military training, plans to shoot Lincoln through the window of an upper floor of a building as the president-to-be gives a speech from the back of a train car. The assassin will use a rifle with "a new-fangled telescope sight." The John Kennedy in this 1951 film is discovering how the other John Kennedy will be assassinated in 1963.

There’s no pleasing some people.

Ideally, one should be able to plug in all the Lincoln and Kennedy variables into some probability formula and compute the odds of all these coincidences being the result of random chance, but the subjective nature of history does not make this possible.

Winning streaks  But do we really need a calculator or an equation? When the first “21” card counter and his financial backer went to Reno, they were thrown out of every casino. The managers who expelled them didn’t know what was happening, but they knew from experience and their own gut feeling that the blackjack winning streaks could not be explained by random chance.

We may not fully understand what is happening, but we should know from experience and our own gut feeling that the Lincoln-Kennedy connections are a “winning streak” that cannot be attributed to random chance.

I doubt that many in the faith community will congratulate me on my proof of God. If anything, they will suggest the assassination links point to the existence of Satan. Yet, if the devil can arrange the times, places and people that make the Lincoln-Kennedy links possible, then he has powers rivaling the Almighty.

JFK: Our American Cousin
​
In July 2015 I borrowed from my local library a DVD titled Visions of Ireland. The 2007 program, created for public television, offers an aerial tour of Ireland. In one scene, as the camera pans the Kennedy Arboretum in County Wexford, the narrator notes that the facility was selected to honor “our American cousin” John Fitzgerald Kennedy, whose ancestors hailed from County Wexford.

A similar reference is found in an irishamerica.com webpage titled “The American Cousin: Memories of JFK’s Trip to Ireland.”

“Our American Cousin,” of course, was the name of the play being performed at Ford’s Theater when Abraham Lincoln was assassinated. While the title refers to a boorish relative visiting an English family, the comedic play, in retrospect, seems to predict the rise of the American president who would be referred to as “our American cousin” by the Irish.
​
I am not done with the assassination synchs. The all-powerful shaper of history is not only methodical and deadly, he is quite the prankster. As noted by Karl Marx, history repeats itself, first as tragedy, then as farce.