In one of the most popular UFO mythologies, the US government supposedly recovered the remains of a crashed UFO along with its alien passengers near Roswell, New Mexico in July 1947.

The Roswell incident began when a rancher reported to the local sheriff that he had found the remains of what might be a flying saucer. The sheriff then contacted military authorities at Roswell Army Air Field, who sent three people to recover the wreckage. On July 8, the public information office at Roswell AAF made the astonishing announcement that the remains of a "flying disc" had been recovered. However, the next day, the military recanted, reporting the wreckage was simply that of a weather balloon.

The Roswell event faded in the media until 1978 when a UFO researcher found witnesses who upheld the original "flying disc" report. Interest in the story further increased with the 1997 release of film purporting to show the autopsy of an alien recovered in the Roswell UFO crash. The Roswell incident and the alleged autopsy became the grist for several TV shows and movies, and innumerable conspiracy theories.

I don't believe that an actual flying saucer crashed in New Mexico. However, I do believe that the Roswell story persists in the public imagination because it represents an effort by the collective unconscious (spirit world) to convey an important message to the collective conscious in our material world. As in any mythology, the truth will be found in pursuing the metaphor, not the literal facts. A flying saucer is a medium for conveying a message from space (the heavens) to earth (the material world). The "alien" is a spirit or soul who, near Roswell, crashed and died. The purpose of an "alien autopsy" is to determine the cause of death. What, then, could kill a soul?

If the soul occupies or is somehow connected to the body, can it truly be non-material? Is the soul a form of matter and/or energy that exists beyond our current comprehension? Maybe the soul exists in another dimension. In any case, a material soul is vulnerable to material destruction.

Location  Ordinarily, death does not a pose a threat to the existence of the soul. Even when death is swift and violent, as in a conventional explosion, destruction may occur at a molecular level, but a soul that existed at the atomic or subatomic level might remain intact. But what if death was so fast and furious that it destroyed all patterns of energy and matter? Under what circumstances would such a death occur? We need only look back at Roswell and heed the real estate maxim: "location, location, location." Roswell is in New Mexico, home of the first atomic bomb test. Here then is a kind of deadly force that could destroy souls.

At Hiroshima, where the atomic bomb was first used against the Japanese, the temperature at the site of the explosion reached approximately 5,400 F. People within a half mile of the fireball were turned into "bundles of smoking char in a fraction of a second," noted Richard Rhodes in the book The Making of the Atomic Bomb. Such black bundles numbered in the thousands: the shadows of destroyed souls. In the explosion of a much more powerful H-bomb, the fireball can expand to three miles in diameter, claiming the souls of tens of thousands. 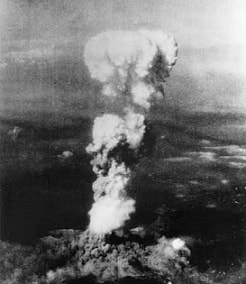 That the creation of a sun on earth could destroy souls is consistent with mythology. The sun god is often represented by a falcon or other raptor, symbolizing the soaring spirit. The earth goddess is usually depicted with a snake, representing the powers of the flesh and the generation of life. The god and goddess thus represent the duality of soul and body. The angry goddess would destroy the body; the angry god would destroy the soul.

The scientists who created the nuclear bomb were not unaware of the spiritual or mythic dimensions of their actions. Moments after the explosion in the New Mexico desert, Robert Oppenheimer, the director of the Manhattan Project, recalled a line from the Hindu scripture, the Bhagavad Gita: "Now, I am become Death, the destroyer of worlds." In communications with each other, physicists considering the ethics of the bomb cited the Old Testament, the teachings of Buddha and various works of literature, such as Mary Shelley's Frankenstein and Shakespeare's The Tempest.

Yet, for all their soul-searching, apparently none of the physicists in the Manhattan Project ever considered the possibility that a nuclear inferno would destroy both body and soul.

The decision to drop the atomic bombs on Hiroshima and Nagasaki ultimately rested with the Commander in Chief, President Harry Truman, who apparently spent little time contemplating the unique destructive power of the atomic bomb. Hitler killed millions of people, but at least the essence of those people, their souls, lived on in the afterlife or through reincarnation. Truman was the first person in history to rob people of both body and soul, and thus he was more destructive than Hitler. Unless, of course, you believe killing souls is a good idea.

Saved in the cloud  However, advances in information technology may suggest a path to salvation for souls threatened with extinction. If your mind is a "computer," then your soul could be a "website" that is stored in a "cloud" outside your physical being.

Conceivably, some people have souls in the "cloud" but in other people, the soul stays in the body and perishes at death. It would be the difference between being "saved" and not being "saved." Or perhaps everyone starts with the soul in the body, but the soul only goes to the "cloud" if the person has a spiritual awakening. Thus, if you are preoccupied with the material world and physical pleasures, you will never reach the "cloud."