Egyptology is traditionally defined as the study of ancient Egyptian art, history, language, literature and religion from 5,000 BC until the 4th century AD, when Christian authorities closed the pagan temples, burned the libraries and disbanded the priesthood. Arab invasions in the 7th century and the introduction of Islam further eclipsed the old Egyptian ways.

When religions die, historians rename them “myths.” However, I would contend that the Egyptian religion and its central deity, the sun-god Re, never really disappeared, but continued in disguised form through other religions and even secular beliefs. The spirit of ancient Egypt permeates Western Civilization in art, music, war, economics and politics.

Thus spoke Re: "I am Khepera at the dawn, and Re at noon, and Tem in the evening." Khepera (or Khepri) rolls the sun across the sky like the scarab rolls a ball of dung. He has the power of resurrection and self-renewal, bringing the sun back to life after it "dies" at night. Re at noon, depicted as a falcon, conveys power and wisdom, but also brings an unforgiving heat as the sun descends to earth. Tem (or Atum), represented by the water lily, carried the god force through the night, assuring its return in the dawn.

Re is represented in earthly form, as a pharaoh or other an equivalent leader, and in spiritual form, in which he traverses the sky in a sun boat with various other deities who help defend the vessel against monsters of the underworld.

In later stories of Re, the aging god confronts rebellious and wicked subjects. Through the “Eye of Re,” he summons a daughter, the lioness Sekhmet, who devours his enemies. This “myth” may have been inspired by real-life insurrections against pharaohs.

The Re cycle is being repeated in modern history, with each god of the trinity representing a different era. Khepera brings rebellion, freedom and creativity, but in his later stages falls into decadence and economic speculation, such as witnessed in the "Roaring Twenties." When the bubble bursts, as in the stock market crash in 1929, Re at noon appears as a reactionary force, seeking to restore order and morality, often through war against internal or external enemies. After war, nations turn to Tem for rest and recovery, as Europe and Japan did during the 1950s.

Abraham Lincoln  An incarnate of “Re at noon” can be found in Abraham Lincoln (1809-1865), whose “falling sun” scorched the earth in the Civil War. The president had several dreams that placed him aboard a ship, his “Boat of Re,” just before several Civil War battles, including those at Sumter, Bull Run, Antietam, Gettysburg and Vicksburg. In Egyptian lore, Re fought demons from his ship; Lincoln was in combat with Confederate “demons.”
​
On Friday April 14, 1865, Lincoln told his cabinet about another ship dream, in which the vessel, with the sun shining brightly in the background, was approaching a peaceful shore. One cabinet member reported Lincoln as recalling the ship was “badly damaged.” We can interpret the dream to mean that by reaching land, Lincoln had reached the end of his voyage and the end of his life. The next day he was assassinated. 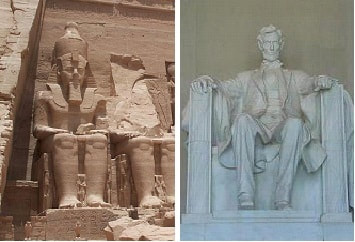 The Lincoln Memorial honors the president who freed the slaves. At Abu Simbel in Egypt, a similar seated figure depicts Ramesses II. Some scholars believe he is the pharaoh who, according to the Book of Exodus, was forced to release the "children of Israel" from bondage,

The destructive “Re at noon” era commenced with the Panic of 1837, when a land speculation bubble burst. Out of 850 banks in the US, 343 closed entirely and 62 partially failed. The panic was followed by a five-year depression and record high unemployment levels. Bleeding Kansas, also known as the Border War, further pushed the nation toward destruction. This conflict, to determine if Kansas would enter the Union as a free or slave state, took place in both the Kansas Territory and Missouri between 1854 and 1858.

Re’s blood-thirsty daughter, Sekhmet, came to life as Harriet Beecher Stowe, whose 1852 anti-slavery novel Uncle Tom’s Cabin aroused the passions of both pro-slavery and anti-slavery readers and divided the country. When Lincoln met the author in 1862, the president reportedly commented, "So this is the little lady who started this great war.”

The Re-at-noon era ended with the president’s death.

Claude Monet  We can find Tem if we step back into Europe of the late 19th century, especially the period from about 1871 to 1901, in which the morally conservative Victorian Era in Britain overlapped the Belle Époque, a period of settled and comfortable life in Continental Europe. An incarnation of the evening god can be found in the French impressionist Claude Monet (1840 - 1926), whose specialty was the water lily, a symbol of Tem.

Impressionism was generally characterized by the play of natural light in the painting, a light originating with the sun. Impressionists worked on unprimed white canvas or a pale background to create a lighter, brighter effect. Their paintings celebrated the outdoors and the everyday life of people. The reign of Tem was a time of prosperity and political conservatism.

Monet first earned recognition with his 1866 portrait “The Woman in the Green Dress.” This depiction of his future wife, Camille Doncieux, bore a passing resemblance to some paintings of Mary Todd Lincoln, a fitting segues between the gods.

Impressionism came to the foreground in 1874 when 55 artists, including Cezanne, Pissarro, Renoir, Degas, Monet, Manet, and his sister-in-law Berthe Morisot, held their first independent group show. Their popularity increased in the 1880s and 1890s, boosted by sales to Americans. 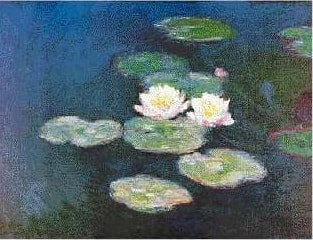 Monet spoke of returning again and again to his water garden and water lilies: "Suddenly I had the revelation of how magical my pond is. I took up my palette. Since that time, I scarcely had any other model . . . These landscapes of water and reflections have become my obsession . . . I must work a lot to find what I'm seeking: the instantaneousness, above all the envelope, the same light spread everywhere."

The work begun by Monet would provide a link to the next Re incarnate: Einstein. F. David Peat, author of Synchronicity: The Bridge Between Matter and Mind, observed, “By the turn of the century the impressionists were treating light as a force which produces and dissolves form and can be broken down into its component atoms of sensation; the logical extension of this work was pointillism, in which all of nature is reduced to dots or quanta of color. A few years later the same notion was being formulated in physics by Planck and Einstein as the quantum theory of light and matter.”

Monet's obsession concluded with a ten-year project: The Water Lilies, a set of twelve life-size canvases he donated to France. Alas, when finally installed in 1926 at the museum of the Orangerie in Paris, they drew little interest. The era of Tem was long over; the age of Khepera was in full swing. The calm of the late 19th century Europe had been shattered by rebellion and war.

Carl Jung & Albert Einstein  Europe awoke in the 20th century to a new dawn of mind and matter: the creative forces of psychoanalyst Carl Jung (1875 - 1961) and physicist Albert Einstein (1879 - 1955), dual representatives of the god Khepera.

Jung coined the terms "introvert," "extrovert" and "archetype" and emphasized the importance of dreams and the collective unconscious in understanding the human mind. The Myers-Briggs Type Indicator, the most widely used personality test in the world, is based on his work. However, Jung was eclipsed by his compatriot, Sigmund Freud, whose emphasis on sexuality trumped Jung's spirituality in the public's imagination.

Nevertheless, an incident in Jung's professional life suggests that he, not Freud, wore the mantle of Khepera.

In his article Synchronicity, An Acausal Connecting Principle, Jung wrote, "A young woman I was treating had, at a critical moment, a dream in which she was given a golden scarab. While she was telling me this dream I sat with my back to the closed window. Suddenly I heard a noise behind me, like a gentle tapping. I turned around and saw a flying insect knocking against the window-pane from outside. I opened the window and caught the creature in the air as it flew in. It was the nearest analogy to a golden scarab that one finds in our latitudes, a scarabaeid beetle, the common rose-chafer (Cetonia aurata), which contrary to its usual habits had evidently felt an urge to get into a dark room at this particular moment."

Knowing that the scarab was a rebirth symbol of ancient Egypt, Jung observed that through this bit of synchronicity, his patient enjoyed a rebirth by rejecting her strict rationalism and embracing the reality of the unconscious.

I would submit that the scarab was there not only to visit the woman but to christen Jung with the identity of Khepera, the scarab god, and validate his spiritual approach to the mind.

When a blind beetle crawls over the surface of the globe, he doesn't realize that the track he has covered is curved. I was lucky enough to have spotted it. — Albert Einstein

Hardly the blind scarab, Einstein, the sun-god incarnate, was certainly the master of light. In just one year, 1905, Einstein contributed three papers to the German Annals of Physics that would revolutionize science. In the first paper, Einstein suggested that light could be conceived as a stream of particles — an idea that contributed to quantum theory and the creation of photoelectric cells.

In his second paper, he presented his special theory of relativity, which demonstrated the relativity of time. Also, in 1905, Einstein created his famous equation, E (energy) equals m (mass) times c (the speed of light) squared, which led to the creation of the atomic bomb. The third major paper in 1905 confirmed the atomic theory of matter. Einstein addressed Browning motion, an irregular motion of microscopic particles suspended in a liquid of gas.

Looking at the sun validated the brilliance of the sun god. In 1919, a solar eclipse proved Einstein's General Theory of Relativity. Observations confirmed that light rays were deflected by the gravity of the sun in just the amount Einstein had predicted. The "blind beetle's" track, the path of light, was curved by gravity.
​
The Great Depression signaled the end of the scarab era.