In a dream from July 2021, I am backstage in a Broadway theater where the shows are becoming more lavish and professional, but the staff feels under pressure. I see two or three racks of costumes. I then see an actor wandering about. He is from a show that ended a long time ago.

I look out at the audience. Theatre seating has been replaced by dining tables, each covered with a white linen tablecloth, with a candle at the center. About five people in elegant clothes are seated at each table.

Someone says that the theatre electrical circuits are overloaded and there will be a fire, although this announcement does not provoke any alarm. I remember there had been previous fires at the theater.

Next, I am outside the theater, looking at it from across the street in the daylight. The street is empty of traffic, and the theater doesn’t look like a Broadway venue but an old movie house with a marque in the front.

My impression was that the venue and the performances kept changing over the years, from vaudeville to nightclub to musical show to dinner theatre to movie theater. I believe each venue and type of performance represents a different era or epoch in human history. When each era reaches its peak, a “firestorm” of change brings a new period of human theater.

The last scene is troubling. Does the movie house appear vacant because humanity has left the stage?

Look to the skies. A spaceship becomes a comet.

The Columbia space shuttle fell to earth on February 1, 2003. My mother worked as an electronic assembler on shuttle components when Columbia was built. She received a medallion and a commendation for her work signed by astronauts John Young and Bob Crippen. My mother was a midwife to the birth of Columbia. I am here to interpret its death.

The shuttle crew represented three main targets of Islamic extremists: America, Israel, and India. Their fiery deaths warned of danger for the people of those nations.

John Hogue, editor of the Hogue Prophecy Bulletin, suggested that the bright streaking shuttle was the "comet" that would herald the fall of a third Antichrist and the beginning of a 27-year war, as predicted by Nostradamus.

Records from China and Europe extending back nearly 3,000 years associate comets with major disasters such as plagues, wars, floods, and fires. Comets were considered part of the heavenly machinery governing our fates. But since Columbia was a man-made "comet," this omen suggests that humans, not gods, govern their own fates. Or it could mean that the man-made and god-made comets are now interchangeable; the border between the material and spiritual worlds has been breached.

According to babynameworld.com, "Columbia," in Old English, is a girl's name meaning "a dove." The dove represents peace. The prospects for peace died when Columbia died.

Also noteworthy is the fact that the major breakup of the shuttle occurred in the skies near the town of Palestine, Texas. Perhaps peace, like the shuttle, will fall apart over the Palestine of the Middle East.

Related article: My mother, the whistleblower 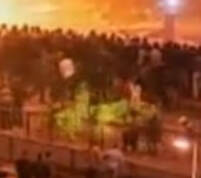 ​​On February 3, 2011, a live Euronews video feed from Cairo, Egypt appeared to show a shimmering green horseman riding through a crowd of protesters. Many observers proclaimed the apparition the Fourth Horseman of the Apocalypse, citing Revelation 6:7-8:

When he opened the fourth seal, I heard the voice of the fourth living creature call out, “Come!” I looked and there was a pale green horse! Its rider’s name was Death, and Hades followed with him; they were given authority over a fourth of the earth, to kill with sword, famine, and pestilence, and by the wild animals of the earth.

Skeptics claimed the horseman was merely a reflection from a nearby fire, although the rider and his mount kept a constant appearance while the fire did not.

To me, the glowing green image of the Cairo horseman resembled the aurora borealis, which is created by the interaction of solar winds with the earth’s magnetosphere. I thought the image might be that of a horseman in a parallel universe and the mini “aurora” was the result of a crack in the barrier between universes, not unlike those fissures depicted in the TV show Fringe.

By “coincidence,” the Wikipedia entry on aurora mentioned both horses and parallel universes. Wikipedia cited a Bulfinch’s Mythology reference, alas unsupported, to a Norse myth:

The Valkyrior are warlike virgins, mounted upon horses and armed with helmets and spears. /.../ When they ride forth on their errand, their armour sheds a strange flickering light, which flashes up over the northern skies, making what men call the "aurora borealis", or "Northern Lights."

English author Philip Pullman’s trilogy of novels, His Dark Materials, explores the nature of the aurorae from a science-fiction standpoint, specifically in Northern Lights, in which aurorae are explained to be areas where the boundaries between parallel universes are especially weak. In the world of Lyra Belacqua, when one peers into the aurora borealis, he or she can faintly see the skyline of a city beyond, in another universe.

However, the Pullman reference was deleted from Wikipedia on August 2, 2011.

Crusades  The Cairo horse’s large flowing saddle pad suggested medieval tack like that worn by both the Christians and their Muslim foes during the Crusades from 1095 and 1291. If we are peering into a parallel universe, we may be seeing an Earth frozen in time: Muslims and Christians locked in a perpetual struggle, never advancing beyond the 13th century, a world where there was no Renaissance or Industrial Revolution. The Cairo apparition may be a warning that the West and Islam have become trapped in an endless struggle that will stifle or even destroy our civilization.

Still another possibility is that the horseman is the ghost of Saladin, a theory also suggested by Ian8r in a review of the video at Sott.net. Saladin was the Muslim hero who defeated the Crusaders at the Battle of Hattin in 1187, which took place near Tiberias in present day Israel. The victory led to his re-capture of Palestine. Saladin became the first sultan of Egypt and Syria, and at the peak of his power, also presided over Mesopotamia, Hejaz, and Yemen. Perhaps the spirit of Saladin has returned to wage war against the New Crusaders and reclaim Palestine.
A glitch in Tomorrowland

​In Disney’s 2015 film Tomorrowland, scientists have created a parallel, utopian Earth, the “Tomorrowland” from which they had hoped to alter the course of our deeply flawed world. Something goes terribly wrong and a pixyish female agent, Athena (Raffey Cassidy), recruits a daring teenage girl, Casey Newton (Britt Robertson), to make history right.

I watched the library DVD on June 22, 2016. As I neared the climax of the movie, Casey is using the Monitor time machine in Tomorrowland to travel to Cape Canaveral. Suddenly, the film stops, and my TV is turned off. I examine the disc. There is neither a scratch nor a smudge. I reinsert the DVD and use the Scene Selection menu to return to where I had left off. The movie stops in the same place and the TV turns off again.

I call it a night. The next day I use a cleaner disc to sweep my DVD player. I return to the Monitor scene. The show continues. (Spoiler Alert) Casey sees a future of devastating war and environmental disasters. The Monitor had been programmed by President Nix (Hugh Laurie) to warn people of a coming apocalypse but, instead of reacting positively, our generation eagerly embraced doomsday scenarios in our media and public discourse.

Casey believes Nix created a self-fulfilling prophecy. She argues that destroying the Monitor will end those bad vibes and reset the world, but Nix wants to preserve the status quo, which includes protecting Tomorrowland from intruders.

Casey and her sometimes reluctant mentor, Frank Walker (George Clooney) prevail, destroy the Monitor, and reset history on a more optimistic path. But they are wrong. The gods meddled with my DVD player and TV, signaling their displeasure with the script. Twice, they put a halt to the plot before Casey and Frank could change the future. The gods have spoken: The apocalypse cannot be avoided.

Changing aspect  The next film I watched on DVD after Tomorrowland was Deadfall, a 2012 crime thriller starring Eric Bana and Olivia Wilde. No problems. Then I watched The Great Budapest Hotel (2014) on June 26, which started with an advisory to set your TV for 16:9. I did nothing, the movie started and exactly fit my screen but about two-thirds of the way through the story, the aspect suddenly changed to 4:3 as in old TV shows, then, shortly before the end, the film switched to widescreen, with bars at the top and bottom. The changes in aspect reminded me of the opening narrative in the old TV show The Outer Limits:

​The “adjustments” to my DVD viewing may be evidence that our reality is a “transmission” controlled by a higher power.
Father Brown and the sinking ship

In a dream on August 9, 2021, I am in a theatre or opera house with an elderly lady who complains, “Why am I here to watch this awful show?” An emcee acknowledges but dismisses the bad reviews and enthusiastically announces the beginning of the show. The show starts with a badly performed song, which the audience boos.

Suddenly, the theatre turns into a ship that is swiftly sinking. In moments, the ship is gone, and the audience members are swimming or struggling to stay afloat in the ocean. I and my companion are then floating in the water of a dock where people are kneeling on a low platform, looking to rescue people in the water, which is only a foot or so below them. However, only dead bodies are being retrieved.

My interpretation is that the theater/ship represents the American empire, which is sinking. The dream occurred as American troops were withdrawing from Afghanistan and the Taliban quickly captured provincial capitals. I expect further shrinkage of U.S. power and influence. 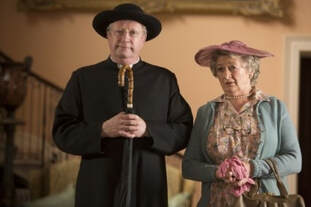 Father Brown and Mrs. McCarthy
​My companion, in retrospect, appeared to be Mrs. McCarthy, the parish secretary in the British TV series Father Brown, which would likely make me the title character, the crime-solving Roman Catholic priest. Thus, I am literally a spiritual detective.