The universe turned against Hillary

The presidential campaign of Hillary Clinton was doomed from the very start of 2016. The universe turned against Hillary, literally.

My Korean lady friend had expressed disappointment that her favorite TV show, The Good Wife, was on hiatus for the holidays. On Thursday, December 31, 2015, I received my daily newspaper, which includes the A&E Source section, featuring the TV schedule for the next week. I checked the Sunday listing and found new episodes of Madam Secretary and The Good Wife scheduled for 7 and 8 p.m. That evening I informed my friend of the good news.

On Sunday, January 3, 2016, I discovered from spot announcements during a football game that episodes of Undercover Boss and Limitless filled the 7 to 9 p.m. spots on CBS. I rechecked A&E Source and found those two shows listed where I had previously seen Madam Secretary and The Good Wife. The universe had changed; a new year brought a new reality.

The seeming “error” in TV programming was an omen for Hillary Clinton. Madam Secretary and The Good Wife are considered by many to be Hollywood’s rosy variations on the life and career of Hillary Clinton as Secretary of State and the long-suffering wife of a philandering politician. Indeed, while recovering from pneumonia during her presidential campaign, Hillary said she was catching up on back episodes of both programs.
​
Since the pseudo-Hillary episodes were replaced by Undercover Boss and Limitless, Hillary was “dropped” from her “schedule” of success and replaced by Donald Trump, the ultimate TV Boss who kept his tax returns Undercover and demonstrated a Limitless capacity to shock and offend his opponents.

Some may interpret these strange events as evidence of divine intervention on behalf of Donald Trump, but the sword of righteousness may cut a different way. God didn’t choose Trump to save America; God chose Trump because He has damned America.
​Big Eyes, big lies, and Trump

He made a living in real estate then used lies and marketing genius to win over the public, all the while mocking the elitists. This Trumpian saga is the story of Walter Keane, who stole credit for his wife’s paintings of big-eyed waifs and created an art empire in the 1960s independent of stuffy galleries and snobby art critics.
​
Director Tim Burton gave a mostly straightforward account of Margaret and Walter Keane in his 2014 movie Big Eyes, starring Amy Adams and Christoph Waltz. The film was a modest financial success and earned the leading actors critical acclaim, with Adams winning the Golden Globe for best actress in a motion picture comedy or musical.

​Although the film chronicles Margaret’s eventual triumph and Walter’s self-destruction, the story seems less about female empowerment and more about two sides of one Keane: the modest Mrs. Jekyll, who can paint but can’t promote herself, and Mr. Hyde, the abusive husband and super salesman who has no talent as an artist. They need each other, even if Walter’s big lie tears at the fabric of their being. That relationship may explain Donald Trump’s political success. Many Trump voters were “silent majority” Margarets who relied on the carnival barker to sell their big-eyed vision of America. 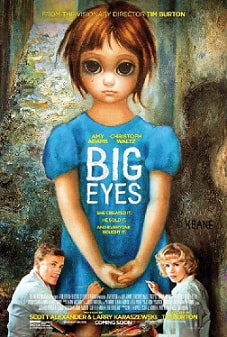 ​In the film, Margaret is liberated not by feminists but by two female Jehovah’s Witnesses who quote the Bible at her door: “Men will be lovers of themselves.” Margaret replies, “Sounds like my ex-husband.” She finally reveals the truth in a radio interview.

Margaret’s ultimate vindication comes in the courtroom when the judge gives her and Walter one hour to complete a big-eyed painting on a blank canvas. Walter dawdles and complains of a sore shoulder; Margaret finishes her picture in 53 minutes. Ultimately, Donald Trump, given a “blank canvas” as president, had a hard time painting in the details of his “huge” plans.

The big eyes scandal and the courtroom showdown were certainly memorable. Or were they? I and others remember the paintings but not the lie. Perhaps, in a different timeline, Margaret Keane never exposed Walter’s fraud and that other fraud, Donald Trump, never made it to the White House. We may be living in a parallel universe in which some people still retain a memory of the previous reality. If true, this would be the second time Tim Burton displayed a painting that crossed time and space. In his Batman, The Scream was replaced by Figure with Meat.

The trip down the Keane rabbit hole goes even deeper. Margaret’s life and work were deeply influenced by her faith. When younger, she was well known at the local church for her sketches of angels with big eyes and floppy wings. Was her paintbrush moved by the Holy Spirit? While Keane said the big eyes revealed more of the inner person, the large dark orbs in many of her paintings also look like the eyes of an eight-week-old human fetus. The sad, big-eyed waifs may depict aborted children who were never born.
​
We would see those eyes again, in the fetal-like aliens in alien abductions: the ghosts of aborted fetuses.
The 1950s are coming back

Many liberals saw the rise of Trump and far-right leaders in Europe, the Philippines, and other parts of the world as a repeat of the fascist rise of Hitler and Mussolini. But if history is truly repeating itself, the defeat of fascism in this century will be followed not by a progressive paradise but by a post-World War II-type era of social conservatism and bourgeoise ideals: the “1950s,” a period often mocked and derided by the left.

(The social description “the 1950s” encompasses the post-war period of 1946 to 1963, before the social revolution ushered in by the Beatles and the Vietnam War protests.)

When the neo-1950s come back, still years away, look for woman to focus more on family and children and less on careers. The alphabet soup can of LGBTQ will be pushed to the rear of the pantry. The self-segregation by ideology occurring now may be extended to self-segregation by lifestyle and race. The cosmopolitan elites will persevere, but they will lose much of their influence in the media. 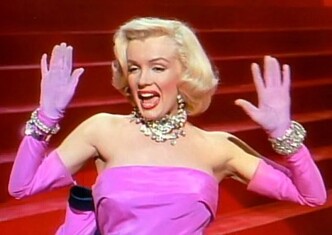 Marilyn Monroe in Gentlemen Prefer Blondes
​While the culture will move right, a liberal amount of government intervention will be required to focus on the family. For example, generous Social Security credits might be given to stay-at-home moms who have gainfully employed husbands.

The era of the 1950s is part of a regular historical cycle in which a “morning” period of rebellion and irrational exuberance eventually leads to decay, which is followed by an “afternoon” period of war and suppression, and then a “night” period of recovery, such as the 1950s, marked by prosperity and conservative social values.

We can see a 1950s-like period from about 1871 to 1901, in which the morally conservative Victorian Era in Britain overlapped the Belle Époque, a period of settled and comfortable life in Continental Europe. That was followed by the more innovative and rebellious “morning” years of 1902 to about 1929, followed by the harsh “afternoon” years of the Depression and World War II.

My cyclical theory is derived from an Egyptian trinity: Khepri at dawn, Ra at noon, and Atum in the evening."
​
The “evening” of the 1950s, marked by the Cold War, could be matched by a cold climate in the neo-1950s, which I expect will start in about 2035. Expect an abrupt change triggered by increased volcanic activity, a giant asteroid striking the planet or a nuclear war, any of which would create conditions blocking the heat of the sun.
Did I save Barack Obama's life?

Here's the thing about the future. Every time you look at it, it changes because you looked at it, and that changes everything else.—Nicholas Cage as Chris Johnson, Next

I may have saved Barack Obama from being killed in Iraq.

In June 2008 I became convinced I had discovered an example of assassination synchronicity. A deadly rhyme and reason could be found in the name of Barack Hussein Obama. Barack would die in Iraq. Friends of Osama would kill Obama. America took down Iraq's Hussein; Iraqis would take down America's Hussein.

The synchronicity in Obama's name was reinforced by an aura of death surrounding the candidate. In May, former presidential candidate Mike Huckabee was addressing a National Rifle Association convention when he was interrupted by a loud backstage thump. Huckabee said, "That was Barack Obama, he just tripped off a chair and someone pointed a gun at him, and he dove for the floor."

Hillary Clinton had repeatedly mentioned the assassination of Robert Kennedy in 1968 as the type of unforeseen circumstance that justified her staying in the primary campaign despite the long odds against her. I thought Hillary's lie about snipers in Bosnia might return as prophecy: Obama could be killed by ground fire as his plane landed at an air base in Iraq.

The prospect of a flight-related death was reinforced on July 7 when Obama's plane, on a flight from Chicago to Charlotte, North Carolina, was detoured to St. Louis after the pilot reported problems controlling the pitch of the plane. (On August 15, it was revealed that the unscheduled landing was a more serious "emergency landing" and the control problem was apparently caused by an emergency passenger slide inflating at the rear of the plane.)

In June and July, I placed articles predicting the assassination of Obama on the home page of my website. I also sent out press releases on the subject to 15 daily newspapers, two alternative newspapers, two New Age/paranormal websites and one magazine. I did not send any release to the Obama campaign as I feared any communication about death would bring an unwanted visit by the Secret Service.

I had on the website also envisioned a detailed scenario of how Obama's death would create the perfect storm of political chaos. McCain would be hounded out of the race for pushing Obama into a death trap by insisting Obama needed to visit Iraq. At the Democratic Convention, Obama supporters would shun Hillary for hovering like a vulture over the doomed candidate. Both parties would try to assuage black rage by putting African Americans on their tickets. I could see a Democratic ticket of Joe Biden as President and Michelle Obama as Vice President facing a Republican ticket of Mitt Romney and Condoleezza Rice.

A victory by Romney would be especially ironic. Mitt's father, George Romney, was president of American Motors, a company that eventually failed and was sold to Chrysler. Mitt Romney could be President of the United States of America, a country that would fail and be sold out to China.

As Barack's trip to Iraq drew near, more omens seemed to appear. A Wall Street Journal editorial of July 18 questioning Obama's core principles asked, "What would Obama die for?" and a CNN special on the assassination of Martin Luther King, Jr. aired in my area on July 19.

On Monday, July 20, Obama began his successful and safe trip in Iraq. He arrived by plane at Baghdad International Airport and toured the city by helicopter. No radical changes in security seemed apparent.

Had I been a complete fool? Or was it possible that my publicity on the subject had somehow found its way to the Obama campaign, the Secret Service and the Pentagon, resulting in some slight shift in travel plans that by a few minutes or a few miles put Obama out of reach of insurgents or terrorists armed with surface-to-air missiles or other deadly armaments?
Arguably, the most dangerous
book in the world.
E-book at Amazon
Images  U.S. flags on National Mall, Lipton sale, CC BY-SA 3.0; Big Eyes movie poster, Electric City Entertainment, et al., fair use; Marilyn Monroe in Gentlemen Prefer Blondes film trailer, 1953, public domain