[As] we were going across the street, we were not terribly far from the World Trade Center building, the south tower. As we were cutting across a, a quarantine zone actually, the building began disintegrating. And we heard it and looked up and started to see elements of the building come down and we ran, and honestly it was like a scene out of Independence Day. -- Ron Insana, MSNBC reporter

Fire from the sky. Attacks on skyscrapers. Buildings collapse as thousands flee through the streets. If the terrorist attack on September 11, 2001, seemed strangely familiar, it is because we saw it before, in the 1996 movie Independence Day, in which aliens attacked our world. To understand why al-Qaeda appeared, at least subconsciously, to follow the script of the movie, we need to understand the symbolism of both the movie Independence Day and the phenomenon of alien abductions.

Consider the classic abduction experience. The abductee first sees a bright light similar to the "light at the end of the tunnel" related by people who have had near-death experiences — evidence of a spiritual encounter. The victim is then raised into a UFO where he or she lies paralyzed on an examination table. Aliens in this "clinic" poke the abductee's body with instruments and extract reproductive material. The aliens are described as having fetal-like characteristics: hairless, small bodies with underdeveloped limbs and large heads.

Angry spirits  This evidence points to one conclusion. The "aliens" are the spirits of aborted fetuses who have come back to haunt us. They are forcing people to share the humiliating and painful experience of being aborted. The "alien" appearance is part of the spiritual message: We treat the fetus like it isn't human. Yet the most alien feature — the large black eyes — has a counterpart in the womb. At six weeks, the eyes of the fetus are wide open and black, without eyelids or irises.

The 1993 movie Fire in the Sky, about a logger's claim that he was abducted by aliens, is nearly literal in depicting the abductee as a fetus. Inside the "spaceship," the abductee breaks out of a placenta-like casing and then floats in a womb-like cavern while grasping what appears to be an umbilical cord.

The similarity between the abduction aliens and fetuses was also noted by Matt Graeber in the Summer 1996 issue of UFO Sightings. In the article "UFO Abductions: Nocturnal Terror," he observed, "Many female abductees are persons who have suffered the loss of a child through miscarriage or they may have terminated a pregnancy (or pregnancies) by clinical abortion . . . How odd it seems that the 'fetus-like aliens' should be 'so caught up' with gynecological procedures and genetic experimentation upon American earth women at precisely the same point in time we Americans are so obsessed with the abortion issue."

While Graeber suggested that alien abduction imagery is generated by internal psychological conflict, I argue that the experience represents contact with the spiritual world.

Through abortion, we summoned a dark goddess, a Terrible Mother. The movie Independence Day, with its fiery destruction wrought by aliens, was a symbolic warning we ignored. Early in the film, we learn that alcoholic crop duster Russell Casse (Randy Quaid) had been abducted by aliens a decade ago. Millions of these aliens, the murdered unborn, have returned in a new womb, a "mothership" of death.

Metaphor became reality. The Terrible Mother guided the hands of the terrorists, the aliens who abducted the airline passengers. A shadow fell across the land as the pregnant goddess squatted over America. Dilate, fire breaks. Hell poured from the heavens on the Twin Towers and the Pentagon. Through abortion, we had the freedom to choose death, and death has chosen us.
​
Let the guilty pay. It's Independence Day. — Martina McBride

Prophecy  In March 2006, while cleaning out some old files, I discovered a press release, "Truth About Alien Abductions Can Put Dole in White House," I had written during the 1996 Presidential election. In the release, mailed to several newspapers and the Bob Dole campaign office, I suggested that the Republican candidate could win the election if he alerted the public to the abduction-abortion connection. Citing imagery from Independence Day, I warned, "If we elect another President who ignores the holocaust of abortion, a shadow will fall across America. Hell will pour from the heavens and a fire storm of civil war and terrorism will sweep the nation."

The press release was dated September 11, 1996.
Jesus is not on our side 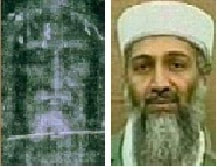 The FBI's Ten Most Wanted Fugitive List and Interpol named the prime suspect in the September 11 attack as Usama Bin Laden, not Osama Bin Laden as it is usually spelled in the media (Fox News being one curious exception). The establishment press didn't want people to catch on to the fact that Usama begins with USA.

We have met the enemy and he is us — Pogo

Synchronicity  The coincidences attributed to Nine Eleven are like the coincidences linking the assassinations of Abraham Lincoln and John F. Kennedy. For example, the Twin Towers looked like the number 11. The first plane to hit the towers was American Airlines Flight 11, which had 92 people on board (9 + 2 = 11). Meaningful coincidences, also known as synchronicity, are a sign that our reality is "scripted" or predetermined by a Higher Intelligence.

America strikes out  If you prefer a sports allegory instead of science fiction, consider the fact that in the 2001 World Series, which shortly followed the Nine Eleven attacks, the New York Yankees were defeated by the Arizona Diamondbacks, who, like the terrorists, were "snakes from the desert."
Jared Lee Loughner, who attempted to assassinate Rep. Gabrielle Giffords, was another "snake in the desert," again in Arizona. The shooting took place on 01.08.2011 (1 + 8 = 9, 1 + 8 + 2 = 11, 20 - 11 = 9). A police car that responded to the murders had the number 632 on it; 6 + 3 = 9, 6 + 3 + 2 = 11. Christina-Taylor Green, the nine-year-old killed along with five other people, was born on Nine Eleven. Keep the abortions coming and Satan will keep the assassins coming.

Homosexuality  Some critics dismiss skyscrapers as phallic objects intended to glorify the egos of their male architects. The race among cities to build the tallest building often seems like a contest of "mine is bigger than yours." Given the symbolism, the Twin Towers celebrated homosexuality: one giant penis next to another. No wonder they provoked the wrath of fundamentalists.

WTC design  The committee that selected the designs to replace the World Trade Center structures lost a chance to choose something more transcendental to commemorate September 11, 2001. The only uplifting shape I associate with the year 2001 is the black monolith from the movie 2001: A Space Odyssey. The slab proportions are based on a universal math concept, the square of the first three digits: 1 x 1 = 1, 2 x 2 = 4, and 3 x 3 = 9. Imagine a black building 100 by 400 feet at the base and 900 feet high.
​
Coincidentally, there already is a building in New York City with a similar shape: the United Nations Secretariat building, which was in serious disrepair at the time of Nine Eleven. We could have rebuilt the UN buildings at the WTC site, a gesture that would have said the war on terror was not just about the US and making money; it was a campaign to preserve international order.

Business cards  In a dream on March 4, 2009, I am in front of my house bidding farewell to a plainclothes investigator who has been questioning me. She gives me a business card and asks me to call her if I remember anything more. I take the card, which appears to be ordinary, but then notice there are three or four cards stuck together. As I spread the cards apart, I discover that the last one has the words "ABORTION IS MURDER" printed in bold white lettering on a black band across the bottom of the card. This dream suggests that some authorities secretly “identify” with my views on abortion.

RU standard  As noted in my Roswell article, the human soul is part of the material world. Thus, in the reincarnation process, the soul does not enter the unborn until it has sufficient space to occupy, which I would judge to be after about six weeks of development, essentially when the embryo becomes a fetus. I base this assessment, in part, on the fact that the medical abortion drug RU-486, typically recommended for use in the embryonic stage, bears my initials as well as those of the drug company Roussel Uclaf.
​
I also make this judgment because the black, narrow eyes like those exhibited by aliens in alien abduction do not take on that distinctive appearance until the fetal stage. Admittedly, my "approval" of RU-486 will displease those who insist life begins at conception. My standard, though, is not the "beginning of life" but rather the "beginning of life with a soul."