A gray-haired woman’s choice of beverage in a music video may decide the fate of London. Welcome to the Multiverse.

The video of Hard Drive Gold by alt-J, which debuted in early 2022, before the Russian onslaught in Ukraine, depicts a city bracing for a nuclear attack and seemed to foreshadow the June 26 headline “Vladimir Putin ally warns London ‘will be bombed first’ if World War 3 breaks out.”

In the video, a female pole vaulter, inspired by the photo of her deceased, medal-winning grandmother, fills her track shoes with her ashes and pursues one last jump despite a radio warning to seek shelter and stay in place.

In her trek to the athletic field through a London suburb while toting her pole, she passes a mother dragging her son out of the front yard. A serene gray-haired woman looks out a window as she holds a saucer with a cup of tea. The tea looks dark. I thought Brits put milk in their tea. Could that be coffee? Probably not, this is Britain.

The running athlete passes a couple who drop their luggage as they flee in a car. A bearded man pushes a shopping cart. Three helicopters fly between tall apartment buildings. A rocket speeds through the sky. As the vaulter reaches the field and runs toward the bar, the music stops, and a bright light fills the image as her body arches through the air. A moment passes. Then a mushroom cloud appears and a smoky blast wave envelopes our hero. 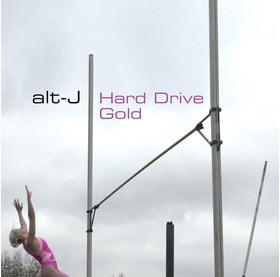 ​The video, in retrospect, can be seen as a big “F-you” to Putin. “We Brits will carry on no matter what you throw at us.” But it can also suggest that the United Kingdom and indeed humanity at large will relentlessly pursue “business as usual” despite all warning signs, whether of warmongering autocrats or climate chaos.

Having seen the video seven or eight times, I took still another look on July 3. Here we go again. The young woman retrieves her pole from the garage. The mother drags her son back to the house. The gray-haired woman at the window sips on a glass of white wine. Wait. Stop. What happened to her cup of tea?

Do I have a bad memory? I’ve had “wrong” memories before, but some were shared by others, evidence that our minds had peered into a parallel universe or alternative timeline.

Different choices are made. New realities and new memories are created. And the memories capture symbolic changes. In one world, the British identity and culture embodied in a cup of tea endure and the nuclear attack remains a fantasy. But not in this white wine universe. London will be destroyed. Or is it the other way around? In the parallel universe of the teacup, London is nuked but survives in our white wine reality.

The Russians would hopefully be deterred by the United Kingdom’s arsenal of 120 operational nuclear weapons. Only 40 are deployed at a time, all on four nuclear-powered submarines. Presumably, they can only be launched at the direction of the prime minister, although there may be a secondary line of command if London was suddenly erased from the map.

Still, the ability of the submarines to receive attack orders might be compromised, if not by Russian signal interference, then perhaps by a natural source: a giant solar storm that wipes out global communications, leaving nuclear powers guessing if their opponents will take advantage of the situation.
​
Perhaps our reality is being reshaped so that a new symbolism overrides the nuclear threat. Putin may assume that Britain’s estrangement from the rest of Europe, caused by Brexit, may leave the United Kingdom with no defenders except a possibly weak and confused United States. This imbalance may be corrected by the UK rejoining the EU, symbolized by Britain giving up its cup of tea, a symbol of nationalism, for a European glass of wine. 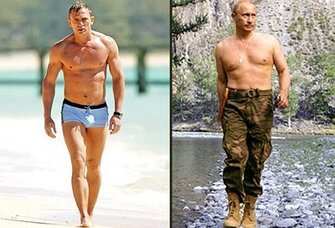 ​Modern autocrats and despots are often film buffs. Russian President Vladimir Putin, a former officer of the KGB, the Soviet Union spy agency, may fancy himself a Russian James Bond, an action hero astride the world stage.

Putin bears some resemblance to Daniel Craig, the current incarnation of Bond. Publicity photos preceding the release of Casino Royale (2006) showed a shirtless Craig emerging from the ocean. Shortly thereafter, photos emerged of a shirtless Putin fishing in a river.

Putin has used many photo ops to show himself as a man of action: shooting a tiger with a tranquilizer dart, scuba diving at an archaeological site, climbing a wall at a summer youth camp, arm wrestling, riding a snowmobile, piloting a motorboat, descending to the bottom of a lake in a mini-sub, and flying a motorized hang glider.

All of this might seem harmless preening except that Putin likely feels he is free to copy another Bond trait: a license to kill. Furthermore, the synchronicity between Putin and Bond may convince the Russian leader that he is blessed by providence and will be successful in all his international “adventures.”
​
And, of course, Bond took on Pussy Galore. Putin persecuted Pussy Riot.
Colin Powell visits Hell

In a dream on January 2, 2022, I am trudging through snow in an arctic landscape when I reach a white door on the side of a hill. I knock on the door, and it opens. I enter a small room, perhaps a boot room. I see another door and knock on it. A man lets me in. I find myself seated in a nicely appointed office, maybe the office of an ambassador or consular official. The man behind the desk is a Russian who gives me cordial greetings.

​We have barely begun to converse when Colin Powell, in a civilian suit, enters the room and sits down on a chair to my left. I think I should leave as there will be high-level confidential discussions. I am escorted out of the room.
​
I interpreted the cold landscape as being the Ninth Circle of Hell as depicted in Dante’s Inferno. 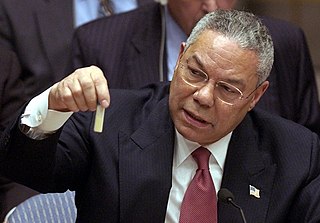 Powell holding model vial of anthrax at UN meeting
​​​
​In retrospect, it seemed that the former Secretary of State was visiting hell because he had promoted the false belief that Saddam Hussein had weapons of mass destruction, a belief that led to our second war in Iraq. He was warning the Russian that his country was about to make a similar mistake in Ukraine. Maybe Powell was just visiting the underworld; Vladimir Putin will become a permanent resident.
The New Quran: Verses of the Mahdi  Click here
Images  Detail from Ukrainian flag, public domain; Hard Drive Gold, Biscuit Filmworks/Infectious Music, fair use; Daniel Craig, Casino Royale, Eon Productions, fair use; Vladimir Putin, Russian state media, public domain; Secretary of State Colin Powell holding a model vial of anthrax in his presentation to the United Nations Security Council on February 5, 2003, U.S. government photo, public domain